At Polaris Fellowship we study a few different types of sword and shield fighting. In our white belt curriculum we teach cruciform sword and round shield, also known as  the targe.

We find the targe to be a good place to begin our student’s education. It comes directly after the students learn the basics of knife fighting. Knife is the very first weapon taught at Polaris.

At later levels we teach various other shields including boss shield and buckler.

The Benefits of Teaching Sword and Shield Early

The sword and shield style provides a great opportunity as an introduction to many of the basics of sword fighting. After establishing the basics with sword and shield, Polaris builds on these concepts as the student studies other weapon styles.

Foundation of Stance and Posture

Using the sword and shield teaches the foundations of stance, posture and stepping in addition to the basic skills of the fight. Students will continue to apply these fundamentals skills as they progress through their training.

With a single sword stance, it can be easy to lax on using the stance or correct forms for throwing a shot to generate power. Without the correct form and stance, the student will not be able to effectively attack or defend themselves.

At Polaris we begin our shield studies with a targe, which is strapped to the arm in two places. We teach a stance which holds the shield straight out from the body. Our introductory stance is very similar to this stance shown in Achille Marozzo’s second treatise. The main difference is that we initially teach this stance with the position of the feet reversed. 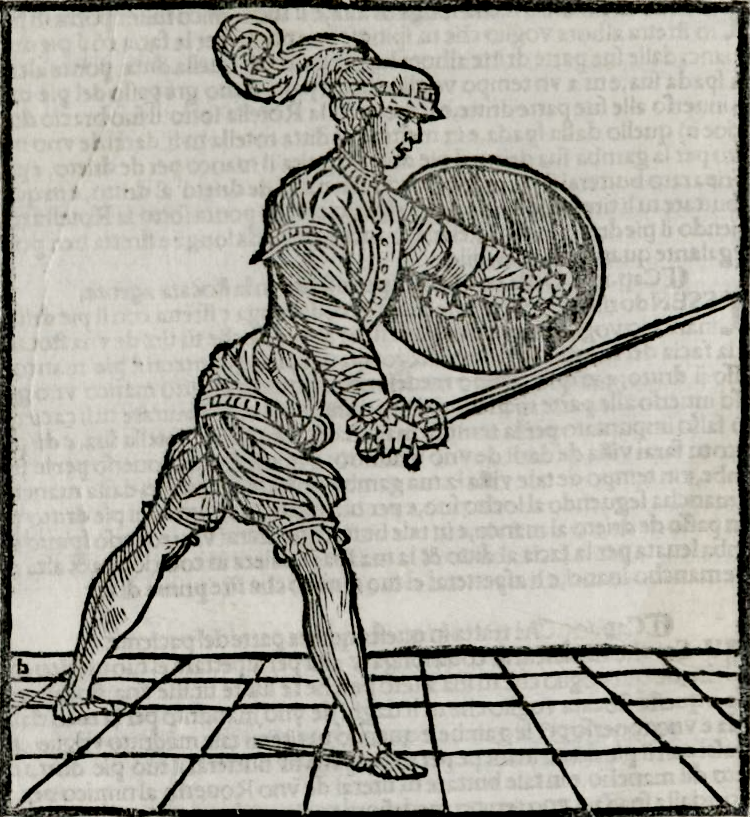 The Shield Creates Space Between The Opponents

Holding the shield out from the body creates space between two fighters. With the shield held out in front of you, your opponent is likely to stay farther away.

When a student keeps their shield out in front of them, they keep the opponent at range.Especially when you begin studying HEMA, it can be advantageous to prevent your opponent from closing.  It means you are better able to visually track what is happening in the fight. The more you can see and track in the fight, the less likely you are to be overwhelmed.

In addition to creating physical space, this stance creates a defensible plane in front of you. The shield is able to move through the space in front of you to protect against incoming sword shots.

We teach a variety of shield circles to effectively move the shield through the defensible areas in front and to the side of the student. By having a defensible plane, the beginning student is better able to defend themselves against incoming attacks.

We begin our curriculum with the sword and shield because the shield can give students more time to process what is happening when sparring. If they’re able to process, they are more likely to be able to respond to attacks using techniques, such as blocking with the shield by moving it through the defensible plane.

Using a sword and a shield at the same time is challenging. Despite the challenge, it is beneficial to beginning students to have to focus on both offense and defense from early in their study of martial arts.

Not only does this work on integrating both hands into the fight, but it also integrates attack and defense techniques. As they improve, they can begin to use these techniques in combination. Beginning students often need the reminder to use both.

Though many HEMA schools teach round or target shields, it is rare to see them in the beginning of the curriculum. Many schools start with a single sword style, or let the students select a style to study based on which classes they attend.

At Polaris, we believe that sword and shield training can be an effective way to learn many of the foundations required for other styles of sword fighting.